Miniatures - It's Not My Fault

One would think that my love for miniatures came from my Grandma, but I didn't pick up the hobby until well after she passed away.

It all started 5 years ago while helping my Great Aunt Edna clean and organize for her.  There was a dollhouse in her basement that drove me crazy. It was in the middle of the room and seemed very large and obtrusive. She had been working on it for her only granddaughter and wanted to get it finished.
To help her out I papered one wall and touched up the exterior paint.
I lost all track of time. I didn't think there was anything (legal) that I could feel so lost in. She got me hook, line and sinker. I had spent 7 hours on a 'childs toy' and LOVED every minute of it.

I was addicted.
It was not my fault - I was just trying to help!
Aunt Edna sent me home with some miniatures that were my Grandmothers. I never had the appreciation for them when I was younger when my Grandma would show me her things. I wonder if I looked at her how people look at me when I talk about miniatures. Did I have that glazed look in my eyes?
One of my favorite pieces my Great Aunt gave me was my Grandma's Dresser that Grandma built from a kit. I was able to add my Grandma's umbrella and rug that she made to make a little shadow box. Those were also accessories of Grandma's that my Aunt shared with me. I still need to finish off this display. 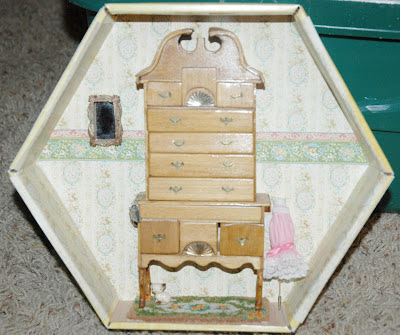 Edna also had a miniature blanket that was just like the blanket I already had at home on my real life bed.
Both were made by my Grandma. 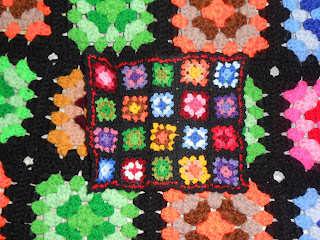 Edna made a deal with me - I would do some more work for her - lots of painting in her condo and in exchange - she would buy  me a dollhouse. 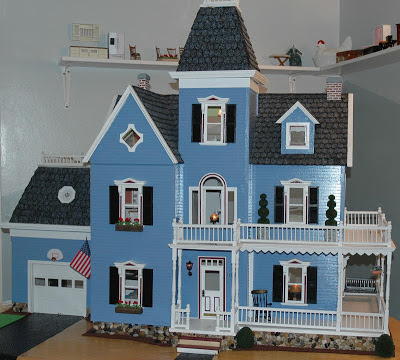 I did have one dollhouse at home in my basement. When my Grandma passed away in 1997 my father gave me the dollhouse that she had built.  I started to pull all the accessories out. They had a new look to me, or I was able to see them with more appreciation of what she did. ﻿﻿﻿﻿


The  Glenwood has its own 'mini room.' On the walls are 2 photos. One is my Dad on his motorcycle, the second is a much younger Aunt Edna on a bicycle. The photo is small, but if you were close up, you would see my father as a toddler strapped onto the back of her bike. 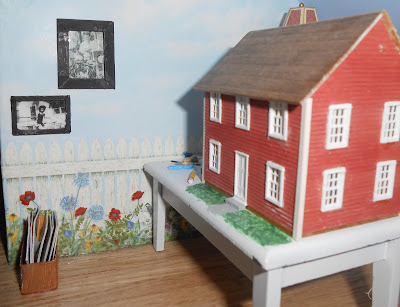 Last week my Aunt had a stroke and passed away early this morning. 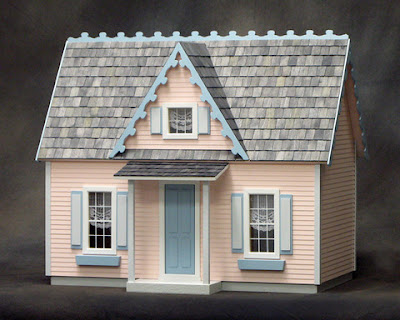 Koda already has it in our mini room with residents. 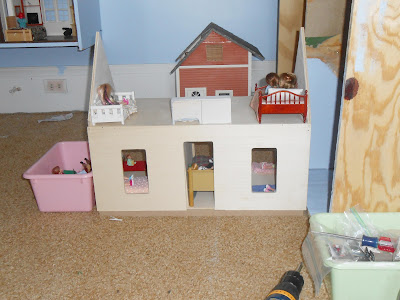 We are both thankful to have her house passed down to us. Right now we are thinking about replicating it as close as we can to a home that she had up north.

This is Edna with my kids about 7 years ago.
(did not have a more recent photo with all the kids and her) The two of us at her home up north 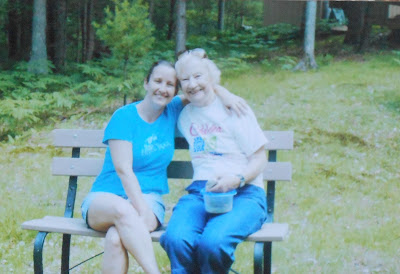 This is probably my favorite picture of her that I took when we were helping her move her belongings out of her northern home.  It was taken from inside the house while she was on her deck having her morning cup of coffee. 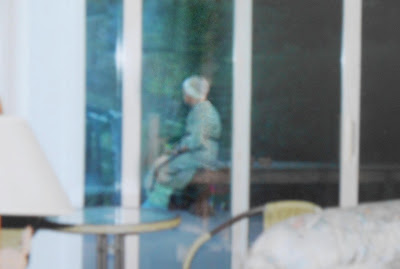 She will be greatly missed, but just like my Grandma - never forgotten.
﻿
Posted by Audra at Sunday, April 14, 2013